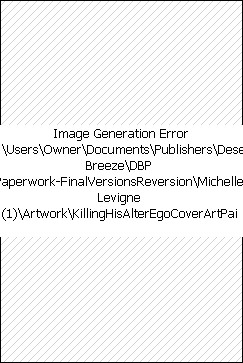 Kyle never meant to be a TV star, but somehow acting in his cousin's graduation project for film school earned him the starring role of a new SF TV series, "Bridger." He certainly never expected the show to last beyond the first few episodes, but suddenly he was an overnight sensation, and on his way to being a heartthrob.

Raine was just a high school sophomore when her mentor, a TV writer, convinced her to try to write a script for "Bridger." Before she knew it, she was cast as Jess, the character she created. She loved Bridger, but quickly despised Kyle, who was a thoughtless jerk. The fans went wild over Jess, and the network made it hard for her to walk away. Kyle tried to make things right, but he kept messing up and made things worse.

When the show ended, Kyle gladly left Hollywood, dumped his stage name, and went back to his family's wildness outfitting station in Colorado. Raine stayed involved in fandom while earning her veterinary degree.  Kyle cut his hair, grew a beard, and tried to forget he had ever been that jerk who broke Raine's heart.

When the rescue of an injured hawk brought them together again, enough time had elapsed, Kyle was able to convince Raine that he only looked like "that" Kyle. They became friends, but their relationship couldn't go any further until he confessed.

Then fandom pressure convinced the network to revive "Bridger," and the creator insisted that Raine and Kyle had to reprise their roles, to please the fans. Kyle had to confess. Now that everything was in the open, could he finally convince Raine to give him a chance? Could she look past Bridger and the jerk, to see the real him? Now he knew how Clark Kent felt about Superman.

Just when they started making some progress in their relationship, the "fringies," the fandom wacko extremists, went on the warpath. Someone didn't want the new pilot movie made, or the series to return to TV. And they wanted it badly enough to put Jess, Kyle, and the whole production in danger.